Doctor Who Legacy: The Ninth Doctor

After only one TV series and six novels the world thought that there would be no new adventures for the Ninth Doctor. The 50th Anniversary year, however, brought us a new short story, a new audio adventure and a stunning mobile game which all feature the Ninth Doctor! 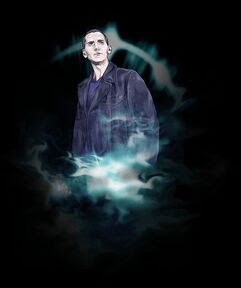 I have teamed up with Tiny Rebel Games, creators of Doctor Who Legacy, to offer you the chance to win a copy of the Ninth Doctor's regeneration costume plus an extra Time Crystal! This costume is currently exclusive to the fan area and this may be your only chance to get it without paying! If you would like it and don't win you can still buy your way into the fan area, get your hands on a copy and support the game all at the same time!

How to Enter: All you have to do is re-tweet a notice about the competition and follow @DoctorWhoUG on Twitter to try and get your hands on this elusive costume! Five winners will randomly be selected from everyone who enters. You have until Wednesday 25th of June 2014 to enter so get re-tweeting!
Posted by Harris Kliskey at 09:33 No comments:

Under the guidance of Russell T Davies Doctor Who returned to TV with a successful first series, but who were the main cast and what are the scores?

Posted by Harris Kliskey at 09:44 No comments:

It's finally time; Doctor Who's return to television with Christopher Eccleston as the Doctor has been a spectacular success but one thing still has to be cleared up. Eccleston has decided to leave the series after only one season and the plan to keep it a secret has been spoilt when the BBC leaked the information about his departure. Before Eccleston even reached the telly it was announced that David Tennant would take up the role of the Doctor for the 2005 Christmas special onwards. John Barrowman exits the show during the finale of Series 1 until his return in later series and, of course, during spin off series Torchwood. The episodes draw heavily upon previous stories in the series with the 'previously' trailer at the beginning of Bad Wolf comprising completely of clips from The Long Game (Episode 7).

Synopsis: The Doctor, Rose and Jack all wake up to find themselves inside game shows - deadly game shows. Classics such as Big Brother, The Weakest Link and What Not To Wear become death traps for any randomly selected contestant! Then the Doctor breaks out, along with "Lynda with a Y" (Jo Joyner), they investigate the mysterious goings on inside what turns out to be Satellite 5, one hundred years in the future! When Rose is disintegrated, the Doctor, Jack and Lynda find themselves on a revenge mission which leads them to floor 500, the base of operations. The Doctor meets the Controller who reveals to him that the Daleks are behind the game station's hidden plot and are converting humans into Daleks! The Doctor thought the Daleks were wiped out in the Time War, but, now they're not, the war must continue...

Afterthought: The episodes gives a dramatic and exciting conclusion to the series. It however feels filled with plot holes and a few filler scenes which don't add to the episode. The Daleks were once again on fine form and the other robots within the episode successfully showed off the production team's handy work. Eccleston was at perfection all the way through however Rose found herself in a few over clichéd moments!

Paul Abbot was originally commissioned to write Series 1's eleventh episode. It would feature the Doctor, Rose and Jack travelling back to just before the eruption of Vesuvius. Jack would find that Rose has actually been grown through science by the Doctor in an attempt to find 'the perfect companion'. The story was dropped however due to its writer being too busy to complete it and instead was replaced by Boom Town. The episode was written because Russell T Davies wanted to explore consequences of the Doctors actions and whether the death penalty is fair punishment. Davies also enjoyed Annette Badland as Margaret Slitheen from episodes four and five and so she was invited back to take part. This episode is considered among critics to be the worst of the series, because of its rushed creation, however the true verdict is at the bottom of this post...

Synopsis: Mickey arrives in Cardiff to bring Rose her passport as the TARDIS fills up with fuel from the rift in time and space which is situated there. However it is soon discovered that Margaret Slitheen has escaped her presumed death and is now mayor of Cardiff! With Cardiff set for destruction and a Slitheen on the loose the Doctor decides it's time to intervene. However despite thwarting Margaret's first plan she still attempts to escape and when her last resort works, the planet is at stake.

Afterthought: I admire the quick thinking of Davies for this script, it does not however, stack up to its full potential. There are some genuine moments of concern for characters but the episode loses out by trying to make serious topics lighthearted.

Posted by Harris Kliskey at 13:53 No comments:

New-who's second multi-part story, written by Steven Moffat, was the highlight of Series 1. It received a Hugo award for 'Best Drama Presentation, Short Form' whilst simultaneously scaring children and adults alike across the nation. Cries of 'Are you my mummy?' were going up from children for the rest of the week after the scary monster introduced in this episode were heard to use the catchphrase. The Torchwood team is now almost complete as John Barrowman debuts as Captain Jack Harkness, the multi-sexual, ex-time agent from the 51st century.

Synopsis: The Doctor and Rose chase a mysterious object in distress flying through the time vortex to London in 1941. In the heart of the Blitz Rose and the Doctor get separated, both meeting rather unusual people. As Rose finds herself hanging from a barrage balloon she is picked up by Captain Jack Harkness who wishes to discuss a deal. Meanwhile the Doctor is busy chasing a mysterious young woman named Nancy who seems to know a lot of information, about the crashed object and the mysterious little boy, but isn't telling. The Doctor is directed towards an old hospital where he meets Constantine, who shows the Doctor how the gas masked patients have been physically changed. Once the Doctor and Rose are reunited, along with Jack they are cornered by the Gas Masked Zombies who all want to know 'Are you my mummy?'.

Afterthought: This episode doesn't actually stack up to its full potential. The jokes continually clash with the creepiness of the story and the German air raids were impossibly fake. It's nice to see the addition of Captain Jack to the TARDIS crew after the failure of Adam earlier in the season. I would have preferred to see Bad Wolf/The Parting of the Ways receive the Hugo award as it turns out much better than this.

Verdict:
Story: 4/5, Very cleverly written!
Effects: 1/5, The nanogenes are quite cool, shame about everything else.
Humor: 3/5, While very funny, it clashes terribly!
Mark Campbell: 5/5, I think he needs to have a word with his mummy!
TOTAL SCORE: 13/20

To further develop Rose's character and to gain a greater understanding of the ever increasing laws of the Doctor Who universe, a story was commissioned to feature the aftermath of Rose changing an important event in her own history. Paul Cornell, who writes this episode, had worked on the Doctor Who books range along with Russell T Davies following the shows cancellation in 1989 and subsequently was asked to write this episode. A heavy feature of this episode is flashbacks to Rose's past in which her mother, Jackie, tells her all about her loving dad. Once Rose visits the past however she discovers that things are not as she imagined them.

Synopsis: After remembering a conversation she once had with her mum, Rose asks the Doctor to take her back to see her dead father while he was still alive. The thing that sticks in Rose's mind is that her dad died alone and so she convinces the Doctor to take her back so that she can be there with him when he dies. Rose, however, messes up her first attempt and instead of going with the plan on her second attempt, rescues her dad from his impending fate. This releases the Reapers and destroys the 'dimensional transcendental' powers of the TARDIS which make it bigger on the inside. With Reapers on the loose around the church and no way out, there are not many options left open to the congregation. The congregations last chance of survival is destroyed when Rose touches her younger self and a Reaper breaks in and kills the Doctor...

Afterthought: There is real sense of emotion in the latter scenes of this. How old is Mickey meant to be; three, four, five years older than Rose? What about the driver, did he not think it was a bit weird when he found himself driving somewhere he didn't need to be at the end of the episode?

Verdict:
Story: 4/5, A really emotional script with a slightly darker approach to the Doctor's attitude!
Effects: 4/5, An exciting brilliance, except when the Doctor is eaten.
Humor: 3/5, A good attempt but the mood is dampened by the episodes impending doom.
Mark Campbell: 4/5, He agrees with me!
TOTAL SCORE: 15/20

Adam Mitchell is one of the shortest-running companions of the new series, so far, after only appearing in two episodes. The companion that was never meant to be, Adam joined the TARDIS only because Rose liked him, not because the Doctor wanted him! Adam was an English boy who worked with the alien artifact collector Henry van Statten in Utah, USA. After watching the Doctor and Rose confront a Dalek, Adam was curious about their other adventures and with a little help from Rose, persuaded the Doctor to accept him into the TARDIS. Adam's error however was to get a brain implant in the far future which could never be removed and so he was dropped off home again by an infuriated and unforgiving Time Lord. Adam later returns to confront the Doctor in the fiftieth anniversary comic Prisoners of Time, by the end of which he is officially named a companion!
Adam's short time on the show was always the intention of Russell T Davies and was included as part of his plan to revive the series. In the script writing phase Adam went through numerous character changes. He was originally planned to be the son of Henry van Statten but later versions of the script had him stealing medicines from the future to help his dying father so it could not be Henry van Statten. Eventually all of these ideas were scrapped in favour of the adopted story of Adam getting information about the future.

Afterthought: Adam was definitely necessary to define for new watchers of the series what a companion should not be. Following his story into Prisoners of Time is rather scary if you think that it was actually the treatment that he got from the Doctor which turned him into a bad guy!

Companion Ranking: 1, He's the only one in contention so far!
Current Rankings:
1. Adam Mitchell

Elsewhere:
Wikipedia - http://en.wikipedia.org/wiki/Adam_Mitchell_(Doctor_Who)
Posted by Harris Kliskey at 14:45 No comments: